Darltie Cooper,1 born August 2nd, 1902 in Arkansas2 was a Negro league baseball player from about 1921-1943. He was the brother of Negro leaguer Anthony Cooper and the nephew of Rufus Battle.3

Cooper with Harrisburg, 1926.
Cooper was the son of Tony Cooper and Louisa (nee Battle) Cooper and grew up in Arkadelphia, AR.4 His first known engagement in professional baseball came in 1921 and 1922 with the Nashville Elite Giants in the Negro Southern League.5 A right-handed pitcher, he threw two no-hitters for Nashville in 1921.6 7 In 1923, he joined the Indianapolis A.B.C.'s, beginning a long tenure of playing underneath the management of Oscar Charleston. The following year, Cooper wrote to Charleston in effort to secure a position on his new team, the Harrisburg Giants. Cooper was signed, and played the 1924-1925 seasons with Harrisburg. He also followed Charleston to the Almendares club in the 1924-1925 Cuban Winter League, going 3-2.8 On November 2nd, 1925, he married Ida Redd in Harrisburg.9 He also began the 1926 season with Harrisburg, but was traded to the Baltimore Black Sox in July.10 However, he quickly left the team and returned to playing for Harrisburg, reportedly because of a sore arm and a dislike for Baltimore.11 12

In Cooper's final season with Harrisburg in 1927, he began to rise to the top of black baseball as an ace pitcher. At this peak in his career, Cooper showed excellent control and a very good ERA. Afterward, Harrisburg disbanded and Cooper joined Oscar Charleston and signed with the 1928 Hilldale Club.13 With Hilldale, Cooper continued the most successful part of his career. He was noted as one of the best pitchers in Negro baseball,14 as well as the "most composed and indifferent-seeming pitcher in the east."15 In the fall, Cooper traveled abroad to play with Almenderes in the 1928-1929 Cuban Winter League.16 He returned to Hilldale in 1929, but the team soon faltered, and Cooper instead followed Oscar Charleston to the Homestead Grays in 1930. With their help, Homestead defeated the New York Lincoln Giants to lay claim to the championship of the East. Cooper played right field and pitched during the ten game series.17

In 1931, Cooper departed from Charleston and joined the Baltimore Black Sox under the management of Frank Warfield. The following season, Cooper shifted to Warfield's upstart Washington Pilots in the short-lived East-West League. He also briefly returned to the Hilldale club that season. From 1933-1934, Cooper pitched for the Philadelphia Bacharach Giants. In one 1934 game, he threw dirt at an umpire while protesting a call and was temporarily suspended as a result.18 In 1935, he joined the integrated Valley City, ND team.19 20 However, he left the club mid-season and soon returned to the Bacharach Giants.21

Cooper was seemingly out of baseball between 1936-1938. In 1939, he pitched for the independent Mohawk Giants of Schenectady, NY.22 In 1940, he returned to league baseball with the Newark Eagles. On May 19th, Cooper broke his foot while running to first base. He remained with the team as a coach for a time,23 but later sued the Newark club for disability compensation.24 He won his case and was awarded twenty-one and half weeks of compensation. Cooper played his final years of baseball with the Mohawk Giants from 1941-1943.

Cooper lived the last three years of his life in Schenectady, NY where in 1944, he became ill. He died there February 13th after thirteen days of illness.25 He was likely buried in Helms Cemetery in Arkadelphia, AR.26 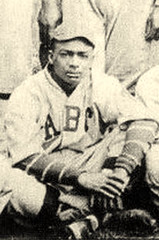 Cooper with Indianapolis, 1923.
"Cooper has been an outstanding hurler for years and life-time buddie of his former manager [Oscar Charleston]. Where one goes the other follows."27

"Darltie Cooper of 31 Lincoln Heights, who died Sunday in the City hospital after 13 days' illness, will be buried at the convenience of the family in Arkadelphia, Ark. He was born in Arkadelphia and lived in this city about three years. He was a resident most of his life in Harrisburg, Pa. For 21 years he had been a professional baseball players, playing with the Mohawk Giants of this city the Harrisburg Giant and the Hilldale baseball team at Darby, Pa. Prior to his illness he was employed in building 59 of the General Electric Co. Besides his wife, Mrs. Ida Cooper, he leaves his parents, Mr. and Mrs. Tony Cooper of Arkadelphia, and a brother Anthony Cooper, of this city."28

"And now to the death roll must be added the name of Daltie Cooper who, I am informed through another sportswriter, died last week in Schenectady, N.Y. Daltie was one of the great pitchers in Negro baseball a decade and more ago, reaching his heights with Colonel Strothers’ Harrisburg Giants and with Hilldale. He had confidence in his own ability to pitch himself out of any difficulty—and he usually did!His last connection with baseball was a few years back when he served for a brief period as manager of the Newark Eagles. And thus goes into the night another of those stalwarts whom we knew in the days when Hilldale was a name with which to conjure."30

1 The uniqueness of Cooper's first name yielded a variety of spellings, including Darlton, Darltie, Daltie, Dalty, and Dalton. He was occasionally called Dottie or Dolly as well.

3 Cooper's mother Louisa (Nee Battle) Cooper and Rufus Battle were both the children of Jerry Battle and Charlotte (nee Jenkins) Battle. Rufus is listed as Darltie's uncle in the 1930 U.S. Census.

26 Newspapers reports of Cooper's death note he was buried in Arkadelphia, AR. However, it's unclear exactly where. The Cooper family had plots in Helms Cemetery. Both of Cooper's parents were later buried in Helm Cemetery.