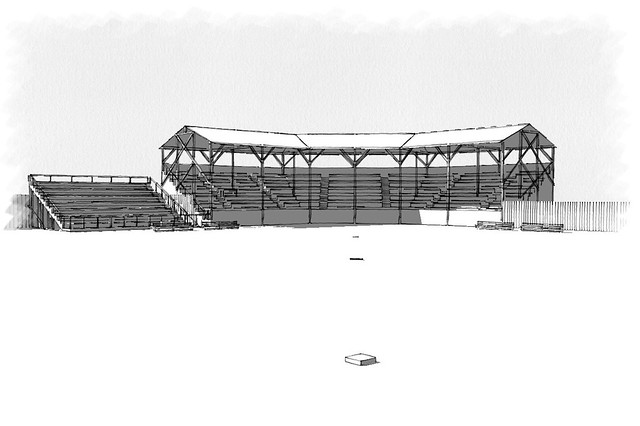 Whittington Park I was a baseball park in Hot Springs, AR, from 1894-1910. It was the home field of several minor league baseball teams, as well as the Negro league Hot Springs Arlingtons. Additionally, it was the training site for numerous major league spring training camps. It was replaced by Whittington Park II during a renovation in 1910.

History
In June 1893, the Hot Springs Street Railway transitioned from mule-drawn trolley cars to electric-powered trolley cars.1 In effort to offset this investment, the railway soon thereafter began developing a small trolley park near the terminus of the rail line on Whittington Avenue in hopes of thereby increasing ridership. The property, which was best reached by street car, was located about one-and-a-half miles west of the city center along Hot Springs Creek in a valley between West Mountain and Sugerloaf Mountain. Among the first attractions developed in the new park were a steam-powered merry-go-round and a large artificial lake that allowed for fishing and rowing small boats and also served as the site of large African-American baptism revivals. The chief attraction to the park, however, was the addition of a baseball park to replace the old Hot Springs Baseball Grounds. Construction of the ballpark was carried out in early 1894, but the natural constraints of the valley made progress difficult.2 The site was rough and uneven, and in order to lay out the baseball field, large amounts of dirt were removed from the mountainside and used to smooth over the grounds. Hot Springs Creek, which had theretofore run through the grounds, was rerouted along Whittington Avenue and covered. The baseball diamond, which was filled with a hard, sifted cement clay, was oriented northeast, resulting in a short left field that ended at the foot of Sugarloaf Mountain.3 Aside from the natural limitations of the grounds, however, the ballpark was well suited. The field was encircled by quarter-mile bicycle track4 and enclosed with a high wooden fence.5 A covered wooden grandstand was built behind homeplate, and an additional section of wooden bleachers was constructed along the first base side of the field. In all, the ballpark comfortably sat about 500-700 persons, not including standing room that was provided by ample foul territory along the baselines.6 Financially backing the project was the president of the Hot Springs Street Railway, Samuel W. Fordyce of St. Louis, MO and his business partner Charles H. McKee, an attorney from Pittsburgh, PA. Harry Price, a longtime sports promoter and a fellow Pittsburgher, was chosen to oversee the new park as Manager.

From its very inception, Whittington Park was considered by major league baseball teams as a viable location to conduct their spring training camps. In early 1894, Chris Von der Ahe, president of the National League's St. Louis Browns, was given a proposition to bring his club to Hot Springs and practice at the yet-unfinished Whittington Park.7 These plans, however, were delayed until the spring of 18958 and ultimately abandoned when an outbreak of smallpox across Hot Springs forced the team to make their spring camp in Little Rock instead.9 Notwithstanding this, Manager Harry Price succeeded in leasing Whittington Park for the following spring to the National League's Champion Cleveland Spiders and the Pittsburgh Pirates, giving the clubs equal use of the grounds.10 Patsy Tebeau, the boisterous player-manager of the Cleveland club and a frequent visitor of Hot Springs, was impressed with Whittington Park and became it's most regular spring patron for several years.11 He at times spoke poorly of the ballpark's playing conditions, but some speculated that he only did so in order to make other teams weary of using the grounds.12 In the spring of 1897, Tebeau sought to bring the Cleveland team back to Hot Springs and share Whittington Park with the Chicago Colts,13 but Cleveland's ownership ultimately opted to forego any spring training trip.14 Instead, the Chicago club shared Whittington Park with the Minneapolis Millers of the Western Leaguen. Tebeau did, however, return with the Cleveland club to Whittington Park in the spring of 1898, as well as in spring preceding the Spiders' ill-fated season of 1899. That year, Cleveland owner Frank Robison bought the National league's St. Louis Browns, giving him ownership of both clubs. After Cleveland finished training in Hot Springs, Robison shifted Tebeau and the Spider's best players to St. Louis. The crippled Cleveland club went on to have the single-worst season in major league history, going 20-134 and thereafter folding. Tebeau, as manager of the newly-named St. Louis Cardinals, led his team in training at Whittington Park for one final spring in 1900 before he resigned and quit baseball midway through the season. With the Cardinals under new management, the club opted to train in St. Louis in 1901. Several teams made efforts to lease Whittington Park in their stead, but the park's owner Charles McKee and Manager Harry Price used their Pittsburgh connections to court the National League's runner-up Pirates club.15 16 For almost a decade afterward, the Pittsburgh club became the near-exclusive lessee of Whittington Park. The Pirates trained on the grounds every year leading up to the ballpark's renovation in 1910, only sharing the grounds in 1902 with Little Rock of the Southern Association.17 The Pittsburgh club did, however, allow other teams and players to practice at Whittington Park in the early weeks of the spring training schedule before the Pirates arrived, typically in February and early March. Most notably, large squads from the Detroit Tigers and New York Highlanders practiced at at the ballpark in early 1908. Similarly, the Brooklyn Superbas of the National League practiced at Whittington in March, 1910, leasing the grounds for weeks proceeding the arrival of the Pittsburgh club.

6 The Cleveland Plain Dealer, 12/31/1894, notes that the grandstand could seat about 2,000. This seems unlikely. Based on the size of the grandstand and the arrangement of the seats, the seating capacity was more likely around 500. The bleachers added about an additional 100-200 seats.

8 It seems possible that the Browns dropped their plans to use Whittington Park in 1894 because of the economical decline associated with the Panic of 1893, or perhaps because construction on Whittington Park was not yet completed.

10 It seems quite likely that Manager Harry Price, a former resident of Cleveland and Pittsburgh, specifically used his connections in those cities to lease Whittington Park to the Spiders and Pirates.