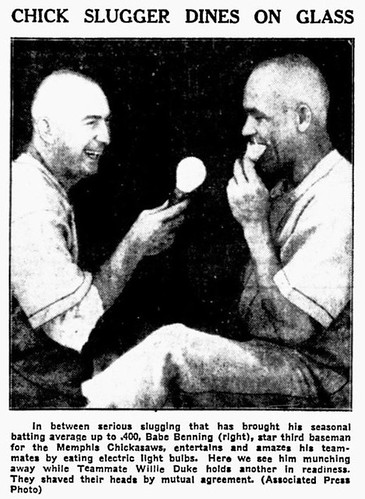 Photo from Sarasota Herald-Tribune, May 6, 1936.
Benning was well-known for his ability to eat lightbulbs.4

Benning died on January 10th, 1975 in Little Rock, AR.5 He was buried in Philadelphia Cemetery in Prattsville, AR.6
Excerpts
"Memphis, Tenn., April 7. - [Special] - The New York Giants are thinking of buying a third baseman who eats light bulbs. He is a youngster named Babe Benning and is now a member of the Memphis tam in the Southern association. Benning is a crinkly eyed, leathery skinned, sparely built Arkansas hill billy and he can play considerable third base. He got seven hits off Giant pitchers in two games; he fielded like Pepper Martin of the Cardinals, letting line drives bounce off his chest before he fingered them, and he otherwise disported himself as a big leaguer. The light bulb eating came up quite by accident. A group was sitting around the office of Freddy Hoffman, Memphis manager, when somebody mentioned the sensational playing of Benning. "Yeah, he's a nice boy," Hoffman remarked, "but he's a little screwy." Pressed for an explanation, Hoffman whispered "Well, I don't like to admit it, but he eats light bulbs!" Everybody thought the affable Freddy was kidding when in walked Benning. "I'll have him do it for you now, said Hoffman. Benning snapped off a desk light and unscrewed the bulb. "This is a little too hot, he remarked. "I'll just let it cool off a minute. I like 'em lukewarm. If they're hot, they give me indigestion." He broke the bulb against a wall. Then he took the shattered fragments of glass and ate them all. Asked all the details of the amazing habit Benning related: "I was just kid down home in Arkansas and my pappy took me to see a circus. There was a glass eat in a side show. When I got home I thought I'd try it, too. I ate a little bulb out of my pocket flash light. It didn't hurt me. I thought it was a swell trick. The next day when I went to school I ate the bulb I'd swiped off the teacher's desk. Soon I was eating lots of light bulbs for bets. I've been eating 'em ever since. Pressed for further information, Benning explained: "You see I chew it up into a real fine powder before I swallow it. No I've probably put away a couple of thousand bulbs be careful not to cut your tongue, though. And if you swallow any big chunks you're liable to hurt your insides."7

"Joseph (Babe) Benning, a former minor league third baseman and manager, died in Little Rock, Ark., January 10. He was 62. Benning played for a number of clubs between 1934 until 1948, including Memphis, Montreal, Knoxville, Wilkes-Barre, and Mobile. He managed at Opelusas [sic]."9

1 Benning's name is cited as Joseph B. Benning elsewhere.