Eddie Lee Handcock, born February 28th, 1933 in Wheatley, AR,1 was a Negro League baseball player from 1951-55 and a professional baseball player in 1954. He was the brother of Leroy Handcock and Eugene Hancock.

Biography
Eddie Handcock, the son of farmers John Handcock and Felma (nee Norrington) Handcock, was raised near Forrest City, AR.2 His pitching career in the Negro leagues began in 1951 at age 18 with the New Orleans Eagles in the Negro American League after he was recommended to the club by his older brother Leroy, an outfielder on the team.3 The following spring, after New Orleans had withdrawn from league, Handcock joined the Birmingham Black Barons. About midseason, he shifted to the Memphis Red Sox where he finished the year with a 2-4 record. 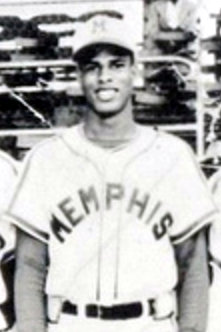 Handcock returned to the Memphis Red Sox in 1953 and went 4-7 with a 5.49 ERA. Despite his unimpressive numbers, he was selected to the East-West all-star classic, though he did not play in the game.4 After the season, Hancock joined the Negro American League All-Stars, who barnstormed with Roy Campanella's All-Stars.5 The following spring, Handcock was given a tryout with St. Paul of the American Association, a Brooklyn Dodgers' farm club, upon the recommendation of Campanella and teammate Joe Black.6 To start the 1954 season, Handcock was sent to Brooklyn's class A affiliate, the Pueblo Dodgers in the Western League. He went 2-1 with the club before he was sent to the Hornell, NY club in the Pony League with whom he went 0-3. Unsuccessful in the minors, Handcock returned to the Memphis Red Sox in June7 and went 1-1 with a 4.95 ERA in six games. At the close of the season, he again toured with the Negro American League All-Stars.

Handcock's last full season in Negro league baseball came in 1955, during which he earned another East-West all-star selection while pitching for Memphis.8 Afterward, he made a final tour with the Negro American League All-Stars.9

After baseball, Handcock settled in Pueblo, CO where he had played in the minors. He married Augustine Franklin and together the couple had six children, including daughters Freda and Kathleen, both of whom gained notoriety as track stars and were inducted into the Greater Pueblo Sports Hall of Fame.

Excerpts
"Eddie and Leroy Handcock, a brother combination from Arkansas State College . . . The Handcock brothers have been contributing to the [New Orleans Eagles] team's recent comeback. Eddie, an 18-year-old pitcher, was recommended to the team by his brother, rightfielder Leroy. In his first starting assignment against the Birmingham Black Barons Eddie held his opponents to one hit over the eight inning contest. He won that game, 4-0. He's been going "great guns" ever since"11

"Eddie Hancock, pitcher from the Memphis Red Sox of the Negro American League, has joined St. Paul on a conditional basis after being recommended by Roy Campanella and Joe Black of the Dodgers."12