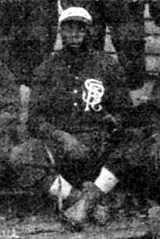 Milliner with St. Paul, 1909.
Eugene Milliner was probably born in Hot Springs, AR,3 the son of Hattie Milliner and an unknown father.4 As a young man, he worked as a bellboy in Hot Springs and played for the local Hot Springs Arlingtons baseball team.5 With remarkable speed on the basepaths, Milliner was what teammate David Wyatt called "the fastest man who ever trod in baseball shoes."6 In fact, Milliner's skills were impressive enough to earn him a job in 1902 when he, along with Arlingtons teammate Wyatt, Rube Foster and Andrew Campbell, joined the Chicago Union Giants. In doing so, Milliner became the first known Arkansan to play Negro baseball. For the next ten seasons, Milliner played professionally with various teams, including the Union Giants through 1903, the Brooklyn Royal Giants from 1906-1907, the St. Paul Gophers from 1909-1910, and the Kansas City Royals from 1910-1911.

In 1910, Milliner worked at the Southern Club in Hot Springs,7 but by 1917 he had moved to Chicago and began working as a pullman porter.8 After continuing to work for the railroad for many years,9 Milliner was killed on January 15th, 1921 near Denver, CO,10 possibly as a result of a train accident.

Excerpts
"Gabbin Miliner [sic], the fleet-footed outfielder of the St. Paul Gophers, lives here and is now employed at the Southern Club. Miliner is the speed marvel of baseball. I have seen Cobb, Baif, Speaker and Keeler, but this lad has got ‘em all tied to a post when it comes to getting down to first base. All players who know him are aware that he will take second of any kind of an infield muff; still none have ever caught him as yet. Miliner was three seasons with the Royal Giants and then with the Chicago Union Giants and one year with St. Paul Gophers. He is just as fast as ever and his speed and hitting helped put a crimp in the Lelands last year. I would like to know why such a man is overlooked in Chicago when there are at least five outfielders with bum legs, still they are all signed."11

"Milliner, the former St. Paul and Chicago player, is scoring some great points for Jack Johnson's Kansas City bunch, and he appears faster than ever."12

"Gabbie Milliner, who formerly played out here, and later on the St. Paul Gophers, is hitting at a terrific clip for Jack Johnson's Kansas City Giants."13

"Eugene ‘Gabbie’ Milliner, acknowledged to be the fastest man who ever trod in baseball shoes died some days ago near Denver, Colo. Milliner was brought here [Chicago] in 1902 together with ‘Rube’ Foster, coming from the Arlington baseball team of Hot Springs, Ark. He was an outfielder and played on various big teams in the east and all of the big clubs of the west. The great White Plague has made serious inroads into the ranks of the ball players, but it appears to have effected [sic] the Hot Springs former great team the most, as no less than five of that great team have passed out via the dread route. Dave Wyatt, ‘Rube’ Foster and Fred Fields are living members of that famous team who are still active."14

"Gabbie Milliner, said to be the fastest man who ever wore ballshoes among our players, died of the great white plague in Denver, last week."15

10 Chicago Whip, 1/29/1921. Dave Wyatt notes that Milliner died "near Denver." However, Milliner's Arkansas Death Index mention suggest he may have died in Garland County, AR, instead.