Girlie Fenter, born September 17th, 1889 in Arkadelphia, AR,1 was a Negro baseball player with the Butte Colored Giants from around 1917-1922. He was the brother-in-law of McKinley Walker, Ernest Walker and Hobart Walker. 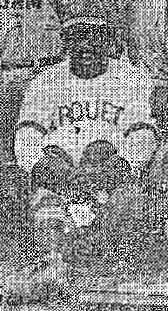 Fenter with the Colored Giants in 1922.
Fenter was the son of Osborne Fenter Sr. and Julia Ann Fenter.2

Excerpts
"Girley Fenter, 73, 714 Maryland, died Sunday morning at a local hospital following an illness. A native of Arkansas, he came to Butte in 1909 and has been a resident ever since. He was an employee of Prudential Federal Savings and a member of the Baptist faith. Many will remember him as an outfielder with the Butte Colored Giants of many years ago. Surviving relatives include his wife, Lurley, a son and daughter-in-law, Mr. and Mrs. William Fenter of Butte; brothers-in-law and sisters-in-law, Mr. and Mrs. Ernest Walker of San Francisco, Mr. and Mrs. Bert Walker of San Francisco, Mr. and Mrs. Carl McClelland of Birne, Ark. [sic]; nieces and nephews, Mr. and Mrs. Mack Arnold of Seattle, and Luther Fenter of Seattle. Additional relatives include a niece, Mrs. Julie Alexander of Sand Springs, Okla., and cousins Ranee Ware of San Francisco and several other cousins, nieces and nephews in Phoenix, Los Angeles, Arkansas, San Francisco and New York. The remains are in the Richards Funeral Home."5