John Gerald Shackelford, born July 17th, 1904 in Memphis, TN1 2 3 was a Negro league baseball player, manager and executive. He lived much of his early life in Prescott, AR and Hot Springs, AR.

Biography
Shackelford's birthdate is often listed as April 9th, 1894.4 However, this is false.5 Rather, Shackelford was born in 1905 in Tennessee, the son of John D. Shackelford and Lula May Oliver.6 He grew up in Prescott, AR, where his father worked as a high school principal and a lawyer.7 His mother died when he was only four, but his father remarried the next year.8 Later, when Shackelford was a young adult, he and his family moved to Hot Springs, AR.9

Shackelford, 1925.
During the mid-1920s, Shackelford attended Wiley College in Marshall, TX, serving as president of the Alpha Sigma fraternity. As a student, he advocated for literacy among blacks10 and participated on the school's baseball11 and basketball teams.12 He was particularly good at baseball and was selected as the best third baseman in the Southern Athletic Association in 1923.13 In fact, Shackelford was talened enough play professionally during the summers between semesters with several Negro league baseball teams, including the Cleveland Browns in 1924,14 the Harrisburg Giants in 1925, 15 and the Chicago American Giants in 1926.16 Later, Shackelford played with the Birmingham Black Barons in 1930.

After graduating from Wiley, Shackelford moved to Ann Arbor, MI, and studied at the University of Michigan Law School to become an attorney like his father. He graduated in 1931 and set up a law practice in Grand Rapids, MI. Meanwhile, he both managed and played for various semi-professional Negro teams in nearby Lowell, MI, including the Fineis Gas Colored Giants from 1931-1932,17 18 the Dixie Gas Stars from 1933-1934, 19 20 and the Chicky Bar Giants in 1935.21 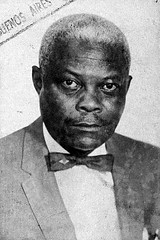 Shackelford, 1962.
By 1940, Shackelford moved his law practice to Cleveland, OH. While there, he became involved in Negro league baseball administration. He was nominated for president of the Negro American League in 1944, but lost the election to J. B. Martin.22 The following spring, Shackelford became involved in the foundation of the upstart United States League and was elected president of the organization.23 The league operated from 1945-1946, but competition from already existing Negro leagues, as well as difficulties associated with wartime economics, ultimately caused it to fail. In addition to serving as president for both seasons the league operated, Shackelford managed the league's Cleveland Clippers in 1946.

Shackelford continued to practice law in Cleveland for many years, eventually moving to Los Angeles.24 At some point in his later life, he traveled to Gaudalajara, Jalisco, Mexico. Ill with tuberculosis, Shackelford died there on June 27th, 1964. He was buried in Panteon Colonias Cemetery in Zapopan, Jalisco, Mexico.

Excerpts
"Shackleford is an all round player [for Wiley College] of more than average ability."25

""Reducing Illiteracy Among Negroes" was discussed at 3:30 o'clock by J. Gerald Shackelford, a student at Wiley College at Marshall . . . "27

"Brother John G. Shackelford [et al] . . . have distinguished themselves as stars on the Wiley baseball team."28

"Another material aid to the fast traveling Harrisburg team is Jack Shackelford, the sensational young third baseman, who hails from Wiley College, Texas. Shackelford has horned into the select class of .400 hitters and has hit safely in all but two games since joining the Harrisburg team."29

"Our president [of the Alpha Sigma chapter of Alpha Phi Alpha Fraternity], Brother John G. Shackelford, has recently returned from Harrisburg, Pa., where he has been playing professional baseball in the Eastern League. Brother Shackelford made a remarkable showing out East."30

"Brother J. G. Shackelford of Alpha Sigma achieved no mean reputation this summer as a star bench warmer on Rube Foster's baseball team. In fact, he was known as the best third baseman Rube had on the bench. In order not to make the games too one-sided they kept "Shack" on the bench and gave the other teams a fighting chance. "Shack" say he may be back next summer but that he needs a new pair of pants."31

"John G. Shackleford, [sic] who was elected president of the United States League in Detroit two weeks ago, is a prominent lawyer In Cleveland, Ohio. He has an excellent baseball background, having once played with Rube Foster's famous American Giants. He was a member of one of Foster's greatest teams, the 1926 combine that won the Negro World Series from the Bacharach Giants of the defunct Eastern League. He is a graduate of Wiley College and the University of Michigan."32

"Mr. Shackelford is a lawyer of Cleveland, OH. He is a native of Tennessee, graduate of Wiley Wiley College, as well as University of Michigan law school. He was a baseball player for several years and was a member of several of the better semi-professional Negro clubs. He is a man of good character and has the ability and the industry to do a good job as the president of the [United States League]."33

"Manager John Shackelford, who is an attorney-at-law in Grand Rapids, also knows something about sportsmanship besides baseball. Although he is the [Fineis Oil Colored] Giants' regular third-sacker, he essayed to pitch with a sore arm and did a good job until the seventh, when he was hit freely and retired for wilson a portsider. Shackelford was somewhat ambidextrous at the plate and sut so prodigiously at the ball he frequently swung himself off his feet. In the third frame he changed from the right to the left hand side of the plate and hit a triple into right field. Batting as a right-hander he hit a fluke homer in the ninth."34

5 Here, Shackelford appears to be mistaken for John Jackson Shackleford, who was born on April 9th, 1894 and died in April 1979.

8 Lula May Shackelford died on April 2nd, 1909. "Zena" or "Jena" Shackelford, who is listed as John G. Shackelford's mother in census records, is presumably his stepmother, Jewell Fanny Glover, whom his father married in 1910.