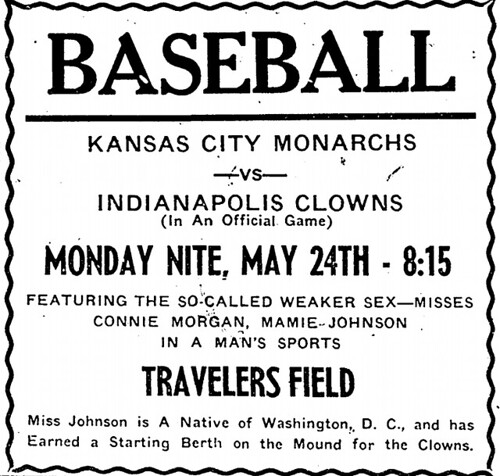 This page is for Negro League Baseball Exhibition Games played in Arkansas.

Definition
For the purpose of this page, "Negro league exhibition" refers to any baseball game played by two out-of-state Negro baseball teams. In many instances, games listed here were not true exhibition games but rather regular season games played at a neutral road location.

History
During the duration of the Negro American League (1937-1962), Negro baseball teams frequently played exhibition games and regular season games in Arkansas. These games were primarily played in Little Rock, but were also common in Pine Bluff, Fort Smith, and Hot Springs. The Memphis Red Sox were particularly frequent visitors to Arkansas, accounting for about two-thirds of all Negro League exhibition games in Arkansas. Among other teams, the Birmingham Black Barons, Chicago American Giants Cincinnati/Indianapolis Clowns, and Kansas Monarchs also regularly played in Arkansas. Postseason all-star teams, such as the Jackie Robinson All-Stars, were common in late-season months.

By the 1950s, the Negro American League began to decline as a result of baseball's gradual integration. Prior to this decline, most Negro baseball exhibitions were competed seriously. However, by the latter 1950s, most exhibition games relied on comical antics to attract fans. Teams performing this form of comedy baseball continued to play games in Arkansas until the mid 1960s.

Exhibitions
The following is an incomplete list of miscellaneous Negro baseball exhibition games played in Arkansas. Results for many of these games were not reported. In some cases, scheduled games may have been canceled or rained out.

24 Taylor Field, A Diamond in the Rough, by George Lea